So there I was, with a classic pair of vintage speakers but with the wood veneer in terrible condition. Here’s the thing: audio equipment in poor aesthetic condition is difficult to sell (even if it’s working perfectly), to the extent that you can knock off, perhaps, 50% of the value. It’s very rare now that I will bid on equipment that isn’t in excellent condition.

I knew these speakers were worth doing up but I had no idea of the best way to do it. So I went to a local cabinetmaker to investigate the possibility of having the speaker cabinets re-veneered. Well, he laughed, and told me that it wasn’t a viable economic proposition. The cabinetmaker — Terry, his name was — then gave me a can of Howard’s Restor-A-Finish and sent me away. He asked for no money or contact details from me, and this man had never even met me before. All he said was this: “Pay me if it works for you.” (Isn’t it nice to come across some old-fashioned trust and “done-on-a-handshake” values!)

Well, I paid that man less than a day later and I’m still using the same can of Howard’s more than a year later.

The genius of this product is that it’s made for lazy bastards like myself: each speaker took me about 10 minutes to do and there is no prep or messy clean-up. Just wipe in on with an old rag, then wipe it off. Wonderful

Check out these “before and after” shots and you’ll see what I mean:

When I bought these, the photo that was used to sell them on line was one of the worst I’ve ever seen — it looked like it had been taken by a alcoholic on a fall-down-drunk binge at night without a flash. The sales pitch gave no model number, no substantive information or specifications . But I could make out just enough to know what these speakers were, mainly because I’d bought a pair of B&W DM1400s (pretty much the same speaker) a week earlier.

The couple selling me these babies lived quite close — about 10 minutes drive away. Their apartment was in a gated compound built on the side of an extinct volcanic cone — it was all high rock walls, red iron, buzzers and swing gates. They met me outside the front door—a brother and sister—and they were both young: he was about 19, she about 17, with naughty, high-class English accents.

And they were both stinking drunk!

I could smell the gin as soon as they opened the door! A couple of tactful questions later and I’d found out that both Mummy and Daddy were overseas and had left them all alone. My next thought was: “Am I buying the “family silver” so these kids could buy some more gin?”

About the speakers themselves — these are largely bulletproof because they have protection circuits to prevent drunken teens from blowing them up. The first thing you need to check is the tweeters as these can fail, but they are generally repairable. The tweeters on these DM14s were both working, as were all the other drivers. Ahhhhh, what a fucking bonus!

These are superbly built speakers and would give most modern numbers a right thrashing! Although not much bigger than a large bookshelf speaker, they weigh in at nearly 18kgs (42lbs). Check out the numbers on these (and ignore the official B&W spec sheet on these — it is wrong): these are acoustic suspension speakers with a frequency range of 30Hz — 22KHz. Yep, they go real low and with heavily damped and well-braced cabinets, they handle that deep thrust with aplomb. Add to this some real wood veneer and not only do these sound fantastic, they look brilliant too.

Note that they LOVE power — at least, AT LEAST, 100 watts RMS per channel on your amp, and more if you’ve got it. Sure, you can run ’em on less, but they will sound, well, kinda bland. 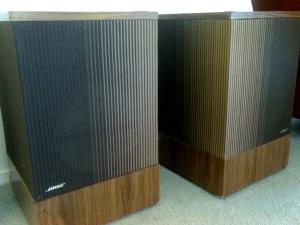 I picked these up so cheaply because they were advertised as Bose S01s, not 501s. As soon as I saw them, I knew we had a winner. My seller this time was another immigrant family — Russians who spoke no English at all (but they understood the local currency). When I got them home, I pulled the covers off as I like to check all speaker surrounds before re-selling. Well, a couple of points to note for any buyers of this particular model; (1) the covers are not supposed to come off as they are stapled on rather than velcroed, lugged or domed (look at the photo taken without the covers and you’ll see that Bose didn’t intend for people to remove them); and (2) they do need to come off occasionally because like most Bose speakers, the foam surrounds will need replacing periodically. Luckily, both surrounds were in good condition and had been replaced within (guessing) the last 10 years. This also explained why the fabric covers were so badly attached when I bought them. To re-attach the covers I took them up to the local picture framing shop, and for $10 the elderley gentleman staple-gunned them back into position.

They are fantastic speakers — these early American-made Bose are superb. The cabinet itself is divided into two sections: the bottom part contains a 10″ woofer in an acoustic suspension design which is fully isolated from the 2 x 2″ mid/tweeters in the upper section. The two mid/tweeters are angled in different directions to give you that “stereo everywhere” feel. Does it work? Well, yes, kind of, in that it does create some interesting, often beguiling, sound effects with instruments seemingly being played in odd corners of the room. I actually like it but find it a little distracting when trying to work. But I could live with these as they are solid, heavy, powerful speakers. If only Bose had used real veneer instead of crappy vinyl.

To sell these, I decided to try a different approach, and listed them in the “Art Deco & Retro” furniture section instead of the audio section — I mean look at them, they are like a couple of retro seventies, ultra-cool sidetables. Well, it worked, as a couple of bidders went toe-to-toe, delivering several hundred dollars more than expected! Just goes to show that when selling, you’ve got to use your imagination!

Literature on one of the greatest speakers ever made. One of my “customers” even offered me a pair of Yamaha NS1000M in exchange for these. I refused…

For more details and a video of these speakers, please go here. 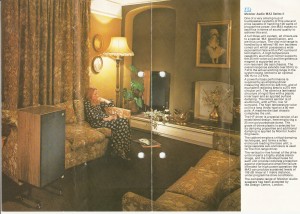 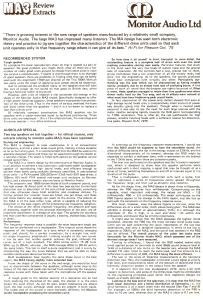 Tamon is a brand that is difficult to find any meaningful information on. They are a small Japanese manufacturer that largely acts as a supplier to bigger Japanese audio firms. Occasionally they put out their own branded gear, and this seems to be aimed at the studio and commercial side of the industry. Having said that, these particular speakers are, I imagine, aimed at the domestic market as they seem to be unnecessarily decorative for commerical application.

This set of Tamon Studio Monitor Pro 6000 Speakers were in extraordinary condition with hardly a mark on them. Give me a set of 25-year-old, three-way speakers with a large woofer over most modern speakers. Deep, tight bass that pushes down below 40 hz. Possibly lacking a little in the midrange but you can tweak with the trim controls.

If you get hold of these speakers or similar, you should note that the potentiometers on the trim controls will likely need a clean periodically. When I purchased these speakers, one mid-range speaker and one tweeter were not working. They both started functioning perfectly after I gave the pots a good soaking with Electrolube contact cleaner. Note that these pots are not accessible from the inside even if you pull out the woofer. The only way to get Electrolube into them is down the shafts, so pull the knobs off, lay the speaker down on its back and spray away. 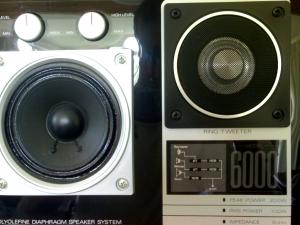 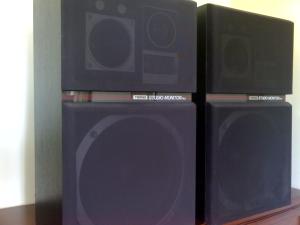