This one I paid way too much for, mainly because I pulled the trigger and purchased it before doing a little research. Still, I made a little coin on the back-end, so all OK!

The CA-410 is the baby in the Yamaha CA-X10 lineup (with the CA-2010 at the top of the tree). This series is perhaps the most famous ever produced by Yamaha, and in many ways was responsible for positioning the brand as a serious hifi producer in the public consciousness. The CA-410 is rated at 25 watts RMS into 8 ohms and weighs about 8kgs.

These smaller models are some of the best vintage buys around. Most buyers chase after horse-power, but when it comes right down to it, we do most of our music listening using only a few watts. My first ever amp, a Pioneer SA-7100, was only 22 WRMS but it was good enough to last for 15 years of music-making and loud enough at numerous parties to get a visit from the noise police! So, if you are on a budget but still want vintage, then this is the way to go. Not too much seems to go wrong with these Yamahas; in fact, I don’t think I’ve ever had to repair one of this series beyond cleaning and lubing pots and switches. 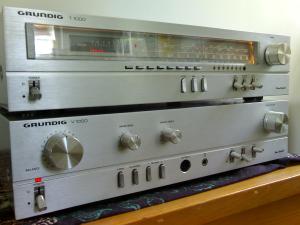 I was so looking forward to trying out this pair when I bought them (along with a Grundig turntable & a pair of Wharfedales speakers). All of this gear had had very little use as it had been in storage for many years. Grundig gear is rare on this side of the world, so I was excited about getting my hands on some of that mythical German build quality  and engineering!

Well, they both worked perfectly (after a little contact cleaner on the amp’s volume and balance pots) but, really, what a major disappointment.

These pieces are clunky, quite poorly made in comparison to most of the Japanese gear of the same era, and they are not overly pleasant to listen to. The amplifier weighs in at 10 kgs, has a massive transformer but is only 35 watts per channel into 8 ohms. It also has two large Siemens 15000 uF caps??? It should be twice as powerful as what it is! What were the Germans doing?

The tuner is perhaps a little more interesting than the amplifier as, although it is analogue, it is enabled so that the user can preset  seven stations and access them via the row of small pushbuttons beneath the dial. I’ve only seen something like this before on Bang & Olufsen analogue tuners. Apart from this function, not even the tuner has much going for it — it even failed to detect several of the FM stations that my Pioneer TX-3000 pulled in with ease.

Overall impressions are that these look better in photos than they do in real life, and that they are both average pieces of hifi gear. But again I got lucky, with two bidders pushing the price up $100 more than I expected to get!

When I turned up to buy this receiver, the guy that was selling it to me had, like, totally forgotten that I was coming. Why? Because he was blasted off his box on weed! Not that I care;  I’ve bought a lot of audio equipment from druggies in the last year, and God knows that there isn’t too many vices that I ain’t tried! (Has anyone else noticed that amplifiers that have been owned for a long time by stoners exude a grassy, resinous smell when they warm up?).

This particular monster—these are big amps in terms of both size and weight—had been in the same family for almost forty years, and both the case and fascia looked like they hadn’t been cleaned in that time. All the pots were very scratchy and there was some DC leaking into the system.

Well, I pulled it apart, soaked all the knobs in bleach, gave the fascia the Blue Magic treatment, and sprayed all the pots and switches. Under the grime there was barely a scratch. Take a look — she’s a beauty. The real-wood veneer case got a treatment with some Howards Restor-A-Finish and all the  damage and scratches disappeared. The internal cleaning didn’t resolve all the problems, so it was off to see Fred at the electronic repair shop. Several dry joints and a couple of faulty caps later she was working good as new.

As far as sound is concerned, these are very mellow, warm sounding with not a huge amount of detail. They are, therefore, perfectly suited to the technology of the time, namely vinyl and cassette. Put a classic set of speakers on these with at least a 10″ bass driver and you will be more than happy. And you will smile more than ever when you look at that blue-lighted tuning dial. Remember also that you can configure these as home theatre amps! Yes, that’s right, home theatre. That’s because you can split these machines into two separate amps and send  different signals to front and back. Home theatre is, after all, merely a variation of quadraphonic!

The value of these amps has been rising dramatically in the last year — they may not be quite up to the impressive solidity of the SA-x800 series but they are still beautifully constructed with brushed aluminium knobs and faceplates, as well as metal cases and bottoms. What they lack is an ability to play A+B speakers, and speakers need to be 6 ohms or more. But if you want an excellent, entry-level piece of vintage gear, then these are as good as it gets. AND, AND, AND, there is the blue fluroscan meters!!! 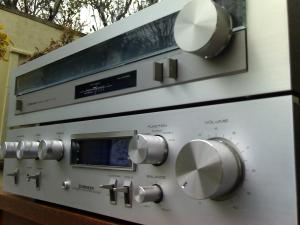 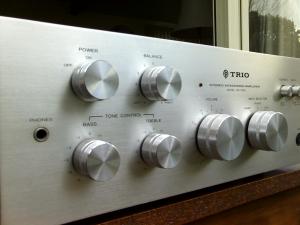 Trio/Kenwood silverface equipment often flies beneath the radar and bargains can be had. This model was pretty much bottom of the range but it still fires out a respectable 25 watts RMS per channel into 8 ohms. Thick aluminium faceplate and  wacky styling — I’m always intrigued by the way in which the designers of 1970s amps never tried to achieve symmetry in their layouts.  These machines sound pretty damn fine but note that they only take one set of speakers. Comes fully strapped with direct-coupled amplifier stages with Darlington Power modules. Like most ’70s amps, this can drive 4-ohm speakers (something most lower range ’80s amps cannot do).

This particular unit was  delivered to me for free from down country by the owner who was coming up to the big city on vacation. The fascia was in near-mint condition (see photos) but the case was a little rough.  I opened it up as soon as I got it to give the pots and switches a good rinsing. The damn thing smelt like a cat had pissed in it so I left it outside (under shelter) for a few days. The loudness button needed particular attention with some cleaner, as it was very noisy. Remember, its not just the pots that need spraying, its ALL the switches/contacts.

One week later, this got sold back down country to the very town that it had come from!

PS: this model also came in a black face with silver knobs and this version carries a 25% premium in terms of price. 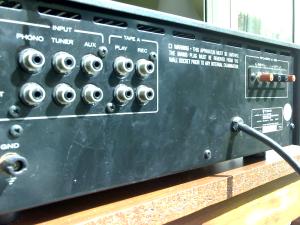