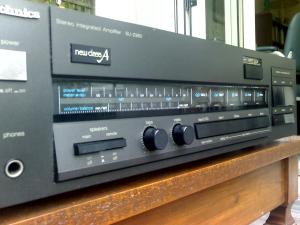 These are the sorts of amps that Technics sold in vast numbers during 1980s. They were cheap, came as part of a complete set of rack separates, and they were usually extremely powerful (if the specs could be believed). What’s more, they were minimalist cool and black, and therefore oh-so modern compared to the no-longer desireable silver monstrosities that characterised the previous decade. This particular model is from about 1986 and was heading towards the top of the range; it was rated at 110 watts RMS per channel into 8 ohms and weighed about 9kgs.

But before we go on,  lets break this down a little.

A few years earlier, an amp putting out this claimed rated power weighed twice as much. So what changed? Looking inside, the transformer is nowhere near as heavy as earlier models. Furthermore, the amp is not capable of driving four speakers at the same time, nor is it capable of safely driving 4-ohm loads! That’s right — many of the 1980s amps are characterised not by what they can do, but what they could no longer do compared to their earlier counterparts. As a further means of saving both weight and expense, take a look at what Technics does at the back of this amp. What you see is a cooling fan, one that comes on when it gets too hot inside. And the reason why it might get hot? Because Technics saved money by only putting in  very lightweight cooling fins. These amps also have very weak spring clips for your speaker wire and these are prone to breakage and failure.

But don’t get me wrong, Technics was still making some excellent gear during this period (but this amp does not qualify). It looks plasticky but most of it isn’t; it is that particular Technics alloy.  If you are on a budget and can find a good one, these sorts of amps are still worth buying. They sound fine, can generally take a pounding and if it breaks down, just throw it away and buy another.

Ignore all this advice if you can buy it cheap!